T.C.'s 'Voice'
About T.C.
To have closer look at T.C. Cannon's work,
please click on the images and scroll. 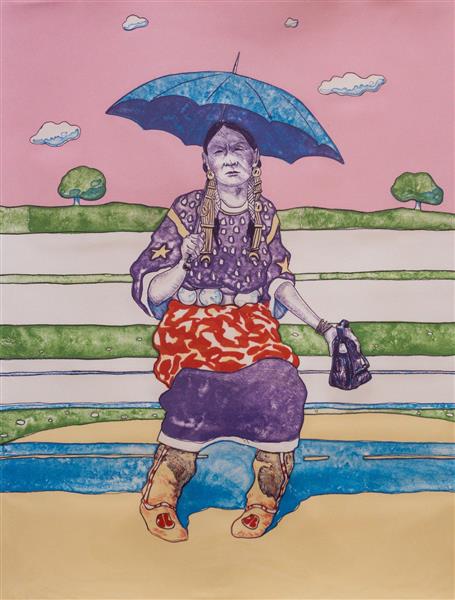 Waiting for the Bus (Anadarko Princess) 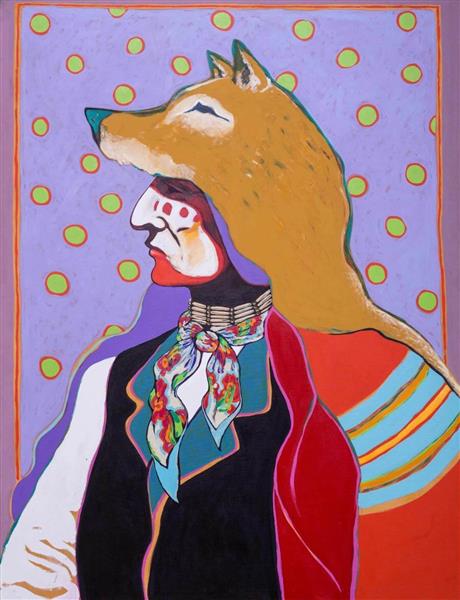 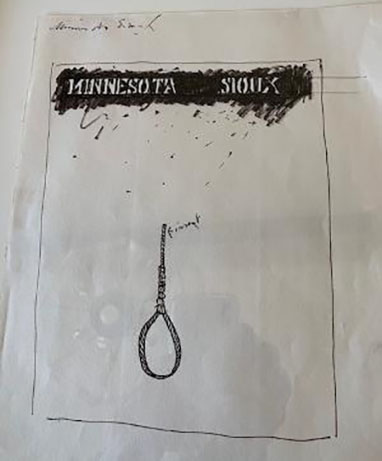 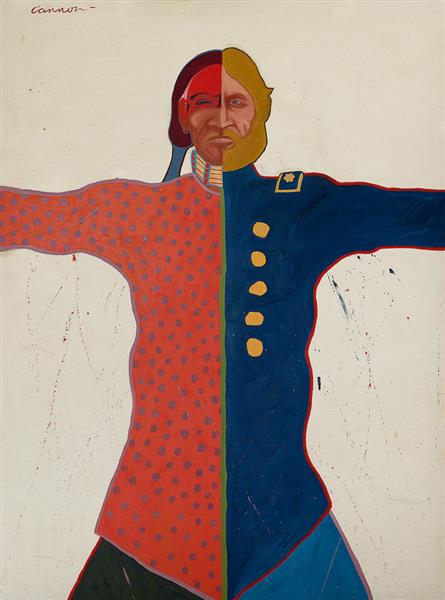 Waiting for the Bus (Anadarko Princess)

Waiting for the Bus (Anadarko Princess) came from true life.  Cannon had proposed to his childhood sweetheart before leaving for the army. Unfortunately, she rejected him because at the time he saw him as just a poor soldier and chose to marry someone else. Cannon didn't paint while in the army, but upon his return he painted Waiting for the Bus... basing it on his former sweetheart. However, after he became a famous painter, before she died; she had her husband ask Cannon's father if she could be buried next to Cannon, where her body lies today.

Is an example of Cannon's portraits. His Hair Flows Like a River is said to feature an Indigenous American man dressed regally in a wolf or coyote headdress. Cannon used bright colors creating a lilac background with green, amorphous polka dots, circled by red lines.

Minnesota Sioux features a noose with the phrase “Insert Here” beside it.  The drawing is based on President Lincoln approving the executions of thirty-eight Dakota men in December 1862 after an unfair trial. The execution occurred a week before Lincoln’s Emancipation Proclamation freed African American slaves.

In the painting “Soldiers” (1970), done before he was 25, Cannon depicts a figure with arms outstretched, in a pose that evokes a crucifixion, against a white background. The left side of the figure is red-skinned and dressed in Native American garb, while the right side is blonde and fair, and is dressed in a blue cavalry uniform.

Please feel free to select the above tab to view T.C. Cannon's work.

The Kiowa name Pai-doung-u-day  means  “One Who Stands in The Sun.” When the Kiowa/Caddo visual artist T.C. Cannon was born, this name was given to him after his father received permission from his family’s elder-cousin. Cannon, born in 1946, was also known as Tommy Wayne Cannon. He was a musician, a published poet, and a Vietnam veteran. Unfortunately, his was a short life as he died in a car accident in 1978.

Cannon stood on the cusp in redefining Native American imagery. Along with fellow artist Fritz Scholder, Cannon’s depictions of Indigenous people during the 1960’s and 70’s rejected the then prevailing, traditional, stoic visualizations of men and women wearing buckskin clothes. A shift occurred in Cannon’s representations of Native Americans and their lives. Featuring both ink drawings and contemporary, brilliantly colored, impressionistic portraits, his work exposed complex and nuanced socio-political issues.

During an interview this past August, Joyce Cannon Yi, the artist’s older sister spoke of his dual passion for both their parents’ people - the Kiowa and the Caddo, along with his heart for service in honoring his land as seen in his going to Viet Nam. Saying her brother was called, “The ‘James Dean’ of Indian Art,” she states his humor would find its way into his art along with his focus on self-representation.

Speaking on his last finished work entitled ToSCA, Yi remembers asking Cannon's wife about the painting. Featuring a couple, a man and a woman, the woman looks as if she's fiercely angry and wants the man to get up and work. Yi laughs as she states, the man simply sits listening to the radio.

Though Cannon no longer holds physical space, he continues to stand in the sun. His creative vision, his heart for service and his sense of humor points all art forward.