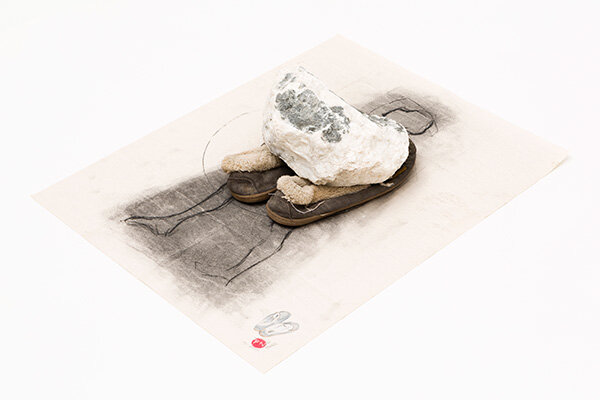 These are my frayed and worn pathfinders, my ragged warriors, my resilient underpinnings, my fearless and tireless seekers of beauty and truth, beyond enmity and mistrust, misery and madness. They were my constant companions in my quest to find the angels behind the devils. The good behind the evil. As you can see here, I repeatedly covered them with food for thought. I admit that oddness is a family trait. They were undaunted, as we walked, strode, marched, slogged, sloshed, ascended and descended on a 3,000-mile journey to put the whole world beneath my feet and as many of its occupants in front of my eyes.

I was looking for shared humanity over tribal differences, hope within desolation and destruction, affirmation beyond discontent, belief beyond bitterness, kinship beyond mistrust, heaven over hell, peace over war. And, yes, I was also looking for a wife, if one presented her or his self. A tall order for a uniquely short person such as I am.

These undaunted foot covers were my sole connection to the earth beneath me. They were, for all their raggedness, my center of gravity for the inclines and descents, as well as my protectors for the unfamiliar sights and sounds deep into the Nights.

I called them my jet wings when I set out to see the world beyond its bitterness. To discover the good intentions of people everywhere. I was looking for answers, for affirmation, for kindness. For beauty in desolation.

I also collected profundities, thinking I could use them as answers when confronted with intellectual discourse as to how and who, when and where I expected to make the world a safer place. And who the hell was I to try? Unfortunately, they are still in a box in a closet, in a coffin of perpetuity - until the world can rescue itself from poverty, disease, mistrust, and, now, global warming.

But the travels of my moccasins and myself took me farther than the estimated 3,000 miles we walked and watched and waited. They brought us to this grand museum to tell our story with silence and thought

My hope is that all of you, marching along from place to place in your shared journeys will be moved to play a part - with both words and deeds -to unearth the best in others as you walk these rooms, streets, boulevards, towns, cities, and nations.

Wherever you leave your footprints.